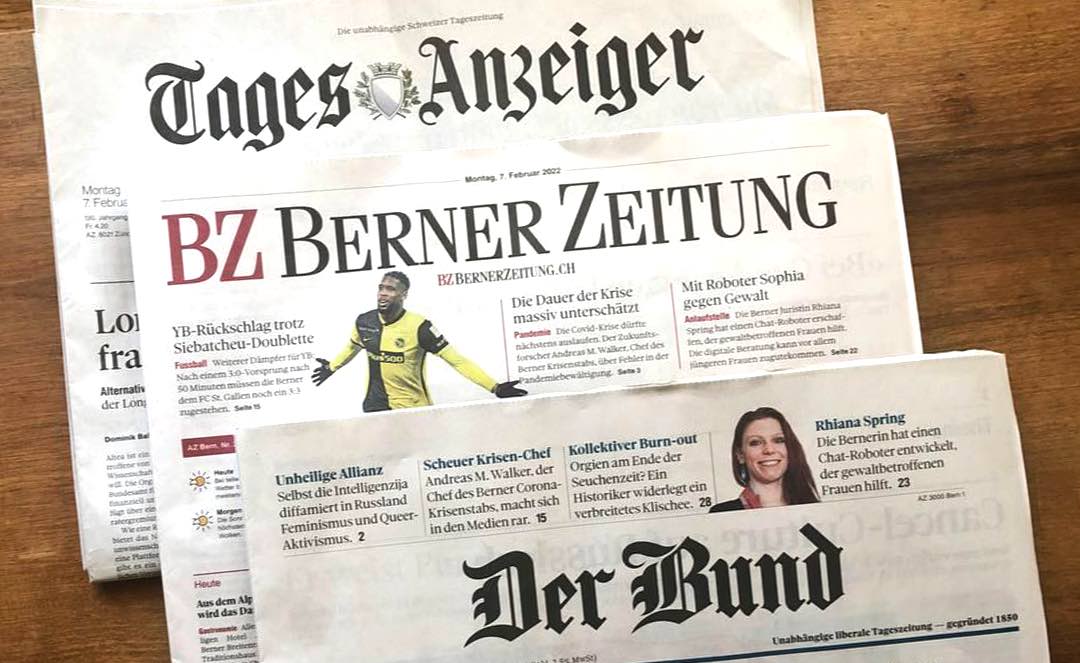 On 7 February 2022, Sophia was featured on the front page of the two main Swiss news papers Der Bund and Berner Zeitung and also featured in the Tages Anzeiger, Basel Zeitung, and Zürichsee Zeitung! The interview with our founder was honoured with a full page spread, in which she shares the story and importance of Sophia – the world’s first chatbot for survivors of domestic violence – and is backed by the umbrella organisation of shelters in Switzerland on its importance. We’re truly humbled. Thank you for helping us spread the word and reach more survivors.

Shame is often the biggest hurdle for survivors of domestic violence. One survivor, who wishes to remain anonymous, says: “I did not dare to talk to colleagues about my partner’s outbursts. He was so charismatic and I was always emotionally upset. So I was afraid that people would believe him rather than me.” In addition, even she herself did not fully trust her own perception: “I am in an executive position at a large Swiss company, and from the outside my life looked almost perfect. Feeling like a victim was contrary to my self-image.”

Today she has managed to get out of her relationship. Now she is one of the first supporters of the newly created digital companion “Sophia”. This is a so-called chatbot, a conversation programme with which those affected can communicate via their browser or via messaging apps such as Telegram and Viber – Signal and Threema are to follow shortly – on their smartphone. To do so, they have to enter www.sophia.chat in their browser or search for “Sophia Chatbot” in the app, after which they can type in questions and receive prepared answers. “Such a chatbot would have been very helpful to me at the time, because I could have asked initial questions without any obligation to act,” says the victim.

How to preserve evidence

Among other things, “Sophia” recommends possible contact points, explains what the police do during an interrogation, and gives tips on how to preserve evidence. For example, you should not just take a photo of the bruise on your arm, but hold your arm next to your face. That way it is clear that it is your own arm.
Sophia was launched by Rhiana Spring from Bern. The lawyer and human rights activist shows her tiny work corner in her flat in the heart of the city of Bern. It is from here that she founded the non-profit organisation Kona Connect, which will bear the new name Spring ACT from March. The association has around 80 volunteers and specialises in helping people in need thanks to artificial intelligence. “Sophia” is the first product and has been used around 1300 times since it went online in December.

The original idea for the digital assistant came to Rhiana Spring when living in Senegal. She was working there for the UN, amongst others looking after refugees. “We had a girl for whom we had been looking for a suitable school for a long time. The difficult thing was that she was actually too old for the appropriate level .” One day Rhiana Spring contacted a colleague at the Swiss embassy – and within a very short time she found three possible solutions were found for the child. “That’s when I had a light bulb moment,” says the 33-year-old. “It’s about putting people in need in touch with the people who can help them. A short time later, after returning to Switzerland from her mission, the pandemic began. And with it the discussions about an increase in cases of domestic violence. “It’s exactly the same principle,” says Rhiana Spring. “It has to be uncomplicated. Survivors need to find out very easily who they can turn to.”

«It has to be uncomplicated. Survivors need to find out very easily who they can turn to.» – Rhiana Spring

What do the women’s shelters say?

The main advantage of “Sophia” is the low-threshold nature of the service, says the umbrella organisation of women’s shelters in Switzerland and Liechtenstein (DAO). The anonymity can help victims to obtain initial information. Another advantage is the possibility to collect evidence such as photos, messages and phone calls. “This new function can also be enriching for our work.” But the chatbot cannot replace personal and empathetic counselling with a real, professional counterpart. Sophia” cannot offer protection either. “If someone is in acute danger, a counselling centre or the police must be involved immediately,” says the umbrella organisation. In the canton of Bern, the women’s shelters can be reached around the clock via the hotline “AppElle!”: 031 533 03 03. (mjc)

Although there are victim support centres, the step is huge for many of those affected. Not only out of shame, but also out of fear: What if the perpetrator finds out about it? With “Sophia”, there is hardly any danger in this regard: those seeking help do not have to download an app, and the chatbot explains to them how to delete their browser history so that it is no longer possible to see which websites they have been on.

They also learn how they can protect themselves at least somewhat in a hurry. For example, “Sophia” advises them to remove all large knives in the flat, pack a suitcase with the essentials – and if the woman does decide to leave the man, to do so when he is not home. This emotionally charged situation is often particularly dangerous. In the future, flyers and stickers in hospitals, at emergency centres and in women’s toilets will specifically draw women’s attention to “Sophia”.

So far, the chatbot communicates in German, French, Italian and English. “Our goal is to offer at least 25 languages in Switzerland,” says Rhiana Spring. However, she has just received a rejection from the federal government for funding. “One of the arguments was that we were too weakly anchored in Switzerland, but that is difficult with a digital service. So far, the association has financed itself through donations and membership fees.

For the younger generation

And what about help for men who suffer from violent partners? “We actually wanted to launch a ‘Kevin’ for men in addition to ‘Sophia’,” says Rhiana Spring. But then she found out that male victims also prefer to talk to a female robot. “It’s obviously easier because they don’t have to maintain their facade of strong masculinity as much.”

However, Sieg linde Kliemen, co-president of the Zwüschehalt association, which also runs the Men and Fathers House in Bern, is sceptical. She is not familiar with the project in detail, but says: “The men who have difficulties finding information on the internet or expressing themselves at offices would not have found the chatbot either. In addition, many are so controlled by their partners that even an inconspicuous conversation with “Sophia” would not go unnoticed.

The crucial question is how many people the chatbot can reach, who would otherwise not seek help. Unsurprisingly, there are no exact figures. But the umbrella organisation of all women’s shelters in Switzerland and Liechtenstein (DAO) says in response to our inquiry: “Sophia has the potential to include new target groups”. Younger people are used to obtaining information and seeking help via their smartphones.

Dear reader, we urgently need your support!
Donate today and help us reach and support
survivors of domestic violence: 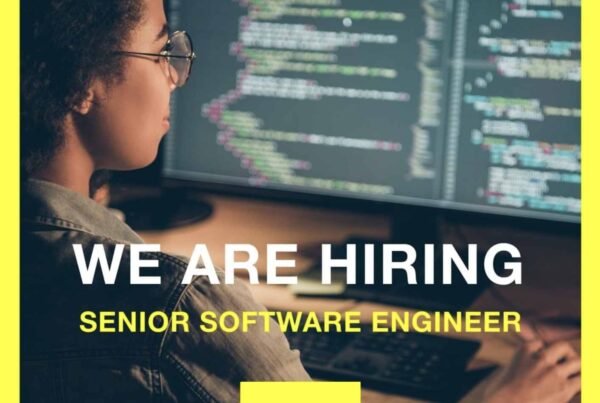 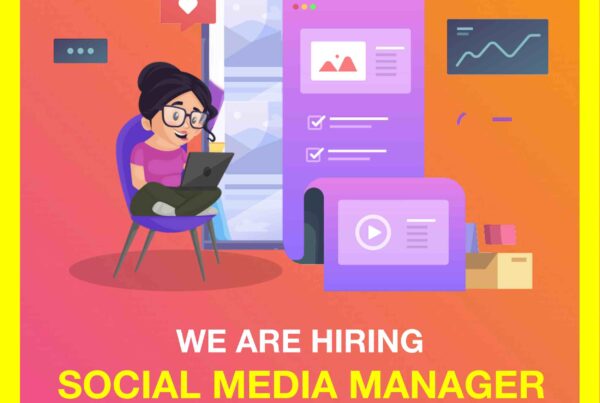 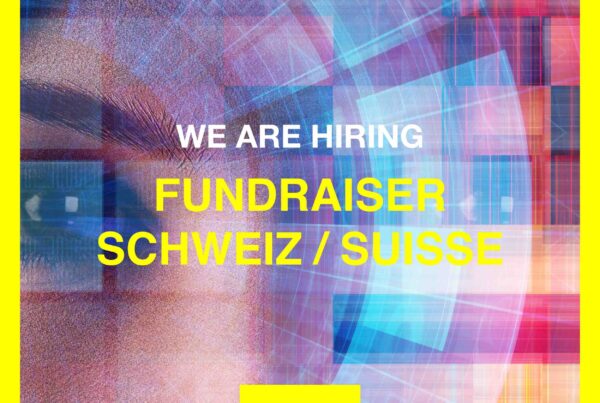